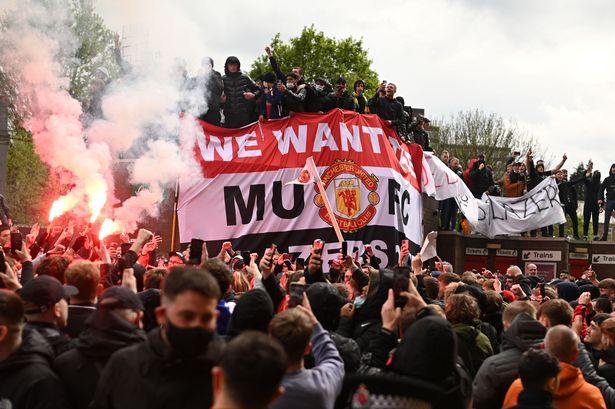 Manchester United’s Premier League game against Liverpool at Old Trafford has been postponed following protests against the Glazer family.

Hundreds of fans got into the stadium ahead of the behind-closed-doors contest, which was originally scheduled for a 4.30pm kick-off before being delayed and then called off completely.

Discussions are taking place around finding a new date for the fixture.

Two police officers were injured during Sunday’s demonstrations, with one hospitalised after “sustaining a significant slash wound to his face”, according to Greater Manchester Police.

A United statement read: “Following discussion between the Police, The Premier League, Trafford Council and the clubs, our match against Liverpool has been postponed due to safety and security considerations around the protest today. Discussions will now take place with the Premier League on a revised date for the fixture.

“Our fans are passionate about Manchester United, and we completely acknowledge the right to free expression and peaceful protest.

“However, we regret the disruption to the team and actions which put other fans, staff, and the police in danger. We thank the police for their support and will assist them in any subsequent investigations.”

Liverpool said they were in “full agreement” with the decision to postpone and will continue to have dialogue with Manchester United, the Premier League and the local authorities to find a suitable date to reschedule.

“It is our position that public safety must be the number one factor in any such decision, with the ability to provide a secure environment for the participants, staff and officials being a particular priority,” said a club statement.

“It was clearly not possible for this to be guaranteed today due to a situation which escalated rapidly.”

The Premier League condemned all the “acts of violence, criminal damage and trespass, especially given the associated COVID-19 breaches” in a statement after the postponement was confirmed.

“The security and safety of everyone at Old Trafford remains of paramount importance,” a Premier League statement read.

“We understand and respect the strength of feeling but condemn all acts of violence, criminal damage and trespass, especially given the associated COVID-19 breaches.

“Fans have many channels by which to make their views known, but the actions of a minority seen today have no justification. We sympathise with the police and stewards who had to deal with a dangerous situation that should have no place in football.

“The rearrangement of the fixture will be communicated in due course.”

1pm – Fans begin congregating outside the trinity statue on the Old Trafford forecourt, as another group starts to protest at the Lowry Hotel, where the United team are staying ahead of the game.

2pm – The numbers of protestors swell to thousands outside Old Trafford, with firecrackers being let off and a group of supporters beginning to march towards the Munich Tunnel.

2.30pm – United fans breach security and invade the stadium, taking to the Old Trafford pitch. Flares are let off, firecrackers are thrown and one supporter is seen wielding one of the corner flags.

3pm – The stadium is in lockdown. A sweep of the stadium is required and there is said to be damage to the pitch.

3.30pm – Despite mounting uncertainty over the status of the match, the Premier League proceeds to publish the official team sheet one hour before the scheduled kick-off time.

3.55pm – The Premier League issues a statement in which it confirms the match will not kick off at its scheduled start time

5.40pm – Officials confirm the game will be postponed.