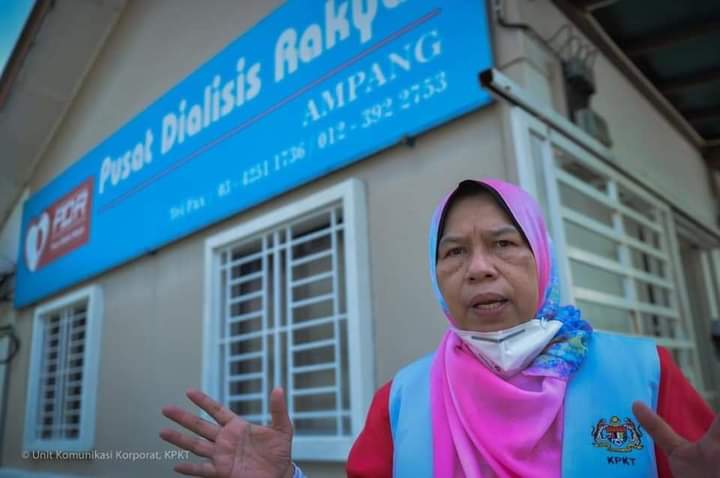 Who doesn’t know this household name ZURAIDA KAMARUDDIN, especially in the Ampang Parliament?

After she won the Ampang Parliament seat in 2008, Ampang which was originally an area outside the political focus, finally became a hotspot or Center of Attraction.

In a special interview with Berita Harian, Zuraida Kamaruddin narrated her initial efforts to approach, be kind, humble and serving the local community’s problem after being appointed as the peoples representative in Ampang.

The establishement of a Dialysis Centre in Kg. Melayu Ampang are amongst the early effords undertaken by her after the oath she took on responsibilities as an elected representitive.

“During my first term after becoming an MP, I built a Dialysis Centre in Kg.Melayu Ampang. I felt sorry for the children who had to bring their parents to a Government Hospital located far from their home. They had to wait the whole day,vresulting in in lost of income, since most of them are from low income families.” said Zuraida remembering those early memories.

Understanding the complicated situation faced by the residents,she gained a council and established the Dialysis facility for Ampang residents. The Dialysis Centre still operates till today and benefitted the Ampang community.

Another success and initial efforts that Zuraida successfully completed was extending the leasing period of Kg. Sungai Puteh land to 99 years, and she also solved the problem of land division in the village where at that time Tan Sri Khalid Ibrahim was the Menteri Besar of Selangor.

The issue of land and settlement in Kg Berembang is another of Zuraida’s success. It has become a long term political issue and is quite sensitive among the community, due to the fact that the previous Government Barisan Nasional had failed miserably in solving the land issue faced by the local residents. Zuraida managed to solve the problem by getting each family a place called home and a piece of land. Till today residents of Kg. Berembang hails Zuraida as a saviour and their heroes.

It is common for a politician after serving more that two terms,their performances and commitments to the constituency they represents will decrease as well as a less attentive attitude but such a thing did not apply to Zuraida Kamaruddin.

Until now, Zuraida is still diligent in serving the Ampang Constituency despite being appointed a Minister in the Ministry of Housing and Local Government. Every walks of race respected her workrate,a very workaholic Minister and her no- nonsence attitude.

Don’t be surprise if political rivals, especially the opposition persist in damaging Zuraida’s charisma. Her services to the Ampang Community and the country transcends and penetrates political boundaries.

Overall, it is clear that Zuraida Kamaruddin is of the view that a prosperous Malaysia is a country governed by leaders who care about all citizens without restrictions and racial segregation.

The new face of Malaysian politics should show true harmony, not rhetoric in writings or speeches. All leaders are leaders for all races.
_PPI

One Comment on “A Decade In Ampang: Zuraida encounter community issues”